Little Ziva was born a champion sleeper. Well, after 5-6 weeks she became one and started sleeping for 5-7 hour stretches all on her own in the arms reach co sleeper. Then, about a month ago we caught colds and her mucus kept her up. Then I started back at work and she started daycare. Then the dreaded “4 month sleep regression” hit (also known as Wonder Week’s Leap 4). She started waking up earlier and earlier, and then multiple times a night.

She was busting out of her swaddle and thrashing about. She took up the hobby of scratching the sheet and the wall of the cosleeper. Over and over and over. She wanted to nurse endlessly and so I started letting her lay with me to nurse and she’d sleep there part of the night. I was waking up constantly to make sure she was still breathing and to keep feeding her throughout the night. Nobody was getting good sleep anymore. I love the cuddles, but we need our sleep.

So, last night she woke at midnight. I breastfed her and gave her another ounce or two of pumped milk from a bottle to fill her up fast and then I turned on the mobile and laid her down in a sleep sack IN HER OWN ROOM! I had planned on room sharing until she was six months, but I was willing to try anything last night to get a little more sleep (anything harmless, never cry it out). It took about 20 minutes of her rolling around and looking around (not fussing at all), and then she went to sleep! She was out by 1am and slept until 6:30am in her own crib in her own room! I’m not sure I’m ready for the separation, but I’m glad it worked at least for one night. 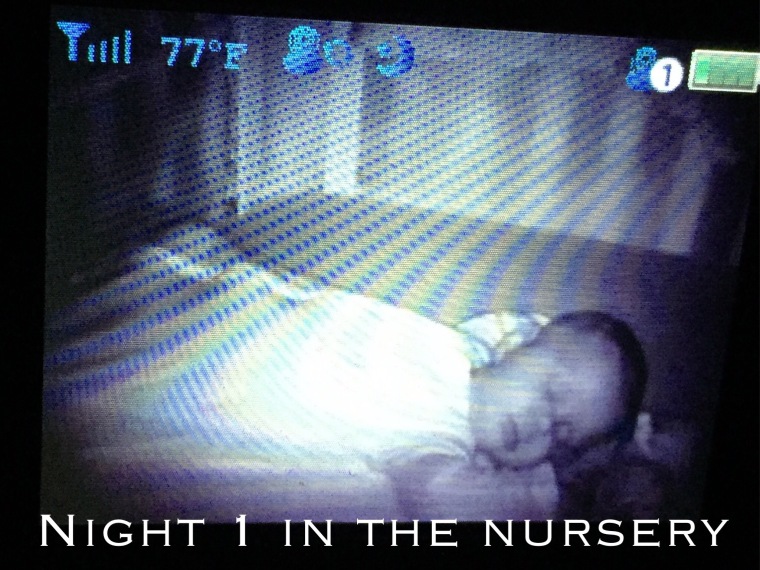 Real thoughts I had during my daughters first night in Her own room:

Oh no, she’s nursing on the toy I forgot to remove from the crib. That’s really sad and now I feel like an awful mom for leaving something in the crib (not safe sleep protocol). I have to stay awake and make sure she is breathing cause I don’t want to wake her to move it.

The video monitor image sort of reminds me of a horror movie.

Oh shit; the front door is between our rooms. What if I see hands reaching into the crib picking her up? Now I have to stay awake and watch her because my waking nightmare has struck terror in my heart. We should put the baby gate back up and I should put bells on it so I can hear if anyone tries to come up the stairs into the apartment.

What if this works? Does that mean the end of room sharing and snuggles? I already miss her….

One thought on “Sleep Struggles ”